Today you can chuckle at my expense !!! Enjoy your weekend !

Designing & Building award winning landscapes has  been a very rewarding, satisfying, fun filled occupation, of course there have been days one prefers to have skipped or passed by, yet more where looking back it was quite amusing now – I’m sure you too have a few you could share with the growing readers too.

So Ann and Chris  are making you an offer you cannot refuse? – well perhaps you can !

Here is the challenge.  If you have an amusing enough incident and you share it here by way of a comment,

Ann & I will call you ( we will have to keep this to an English conversation for now) , we will give you at least 5 minutes to describe in your own words the Opps! moment, you may also give your business a gentle plug!

So let’s get the ball rolling with some of those Opps ! or “Out take” moments that  have happened to me.

The first that I remember wasn’t actually related to horticulture it was whilst working during a summer recess from college, working as a summer assistant lock keeper, at  Mapledurham, which I think is in Oxfordshire,  as I recall a quite well known movie was being filmed at the time called  “The Eagle has Landed”, just across the reach from the lock. 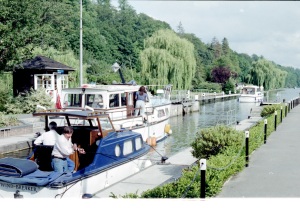 On this particular day, there was lots of action and noise from the film set, lots of tourist and regular cruisers plying up and down the Thames. The lock is quite large – from memory nearly 200 ft long and about 16ft wide with a 5 ft  rise and fall. Because we were busy we were packing in the boats. Anyway, having filled the lock with boats I opened the sluice gates to let the water out and let the lock water level fall around 5 ft, as this happened I was distracted by the filming. the next minute I turned to see all the boats hooked up with no water beneath! … not a good position to be in !

It took some time to undo the resultant mess….

Sticking to water… one night I was making a visit to a potential client on the way home, it was around dusk, the home owner was a banker, they had a lovely home in Chislehurst, Kent. After a brief talk we took a short stroll around the garden as dusk was fading, it was a long time but it was quite dark by the time we headed back to the house. For some reason, I was talking to the client side by side one moment and the next I was treading muddy water, tearing though a rather decrepit swimming pool cover having missed the dog leg steps on the poolside. The water soon reached my waste, and my suit took on a rather unusual color and smell..meanwhile the client rushed indoors exclaiming I had fallen into the pool, which brought the whole family out giggling !.. somewhat soaking I drove the last 15 miles home. We ended up completing the project, one of the requirements was to break out the miscreant swimming pool ! 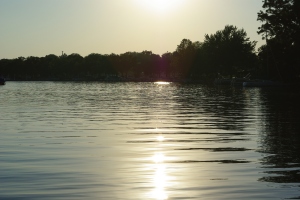 On another occasion we were contracted to dredge a small lake and construct a weir. ( a pond is in my definition an area of water in which you can throw a stone over it to land on the other bank. A lake is where the stone falls into the water). So dredging a lake is a task, requiring a variety of big toys… in this case we arranged with the local waterways folks to block ( legitimately) the upper inflow channel, allowing  the water in the lower lake to fall around 8-12 ft which would allow the use of a piece of equipment similar to a dragline. Unfortunately, whilst we knew the plan, the water folks knew the plan and the parks department knew the plan, nobody had told the security guys – who “unblocked’ the upper lake outfall late in the night, thinking some vandal had blocked up the outfalls !

So after about two days of working we returned  in the morning, to find the lake full of water , the equipment  marooned 50 ft out in the lake,with their tracks buried and the mud slowly engulfing the cab.. some drastic action was needed, a very heavy lift truck was used to winch out the equipment, and we changed our method  of removing the silt,to pumping the now slurry into a temporary  lagoon to dry out before carting away.

The next was a tad more mundane,  well it started that way at least. We had just completed a large ‘cut & fill’ project covering many tens of acres on a setting out ground for a new power station, we were preparing one area of about 30 acres for seeding when suddenly the bomb squad pulled up, I kid you not…

Here is an English sapper exploring on the site !

Apparently they had been told that a lady across the way ( about 1/4mile, you can see the block in the distance) had just recalled a flight of German bombers had dropped their loads of bombs  in the 2nd world war ,just where we were working  some had failed to explode…

so they dug around for a few days, messing up our seed bed and left, when they failed to find any …..

Some ten years later, whilst preparing for the new Queen Elizabeth II, Dartford bridge,  the said 15 or so unexploded bombs were indeed found in the hedge row not 70ft from where the bomb squad had poked around !!!

The Chelsea Physic Garden – Linking people to plants and nature