I’ve spent years designing & building some fabulous projects all over the place, thanks to the staff I was fortunate to employ, we were rewarded with a huge number of awards and prestigious projects, some came with extremely unusual moments :-

These are not in order, more how I recollect them…

Let’s start with the Tower of London, a straightforward design and instal irrigation system to the Queens terrace ( that’s just outside where you queue to see the Crown Jewels).

The design was completed, setting out of the lines completed and we had started to trench the main lines when, suddenly we exposed some bones – human bones.. when this happens it’s extremely wise to contact a few people in no particular order they were the facility manager ( they have a wonderful name here – The Keeper of the Keys), the coroner, and I suppose the local constabulary, although it was very doubtful that this was indeed nefarious.

Indeed it turned out to be the remains of a priest who had been buried there in the mid 20th century and forgotten. As the area was close to the infamous ‘Block’ we waited until everyone had left and a quiet consecration service was held. 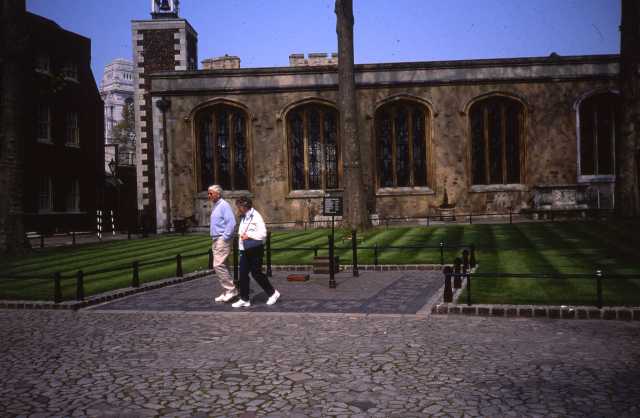 The next was a tad more mundane, we had just completed a large ‘cut & fill’ project covering many acres on a setting out ground for a new power station, we were preparing one area of about 30 acres for seeding when suddenly the bomb squad pulled up, I kid you not… 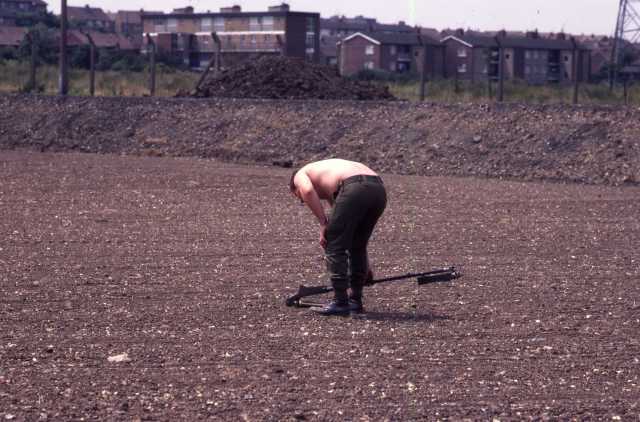 their loads just where we were working in the 2nd world war, and some had failed to explode…

so they dug around for a few days, messing up our seed bed and left.

Some ten years later, whilst preparing for the new Queen Elizabeth Dartford bridge,  the said 15 or so unexploded bombs were indeed found in the hedge row not 70ft from where the bomb squad had poked around !!!

Only in the USA… well maybe

I was called to see if we would like to be involved in a project involving large rocks and trees, it seemed that a wealthy gentleman was in a hurry to complete a fully mature landscape – he’d been working on the project for about 10 years, so it probably wasn’t that much of hurry.

When I arrived he was indeed pushing the boundaries….

This tree was about 600 tons in weight and perched at least 15ft in the air, the wooden columns were due to stay in place, as we approached  the site manager was asked by the foreman if the position was ‘OK’ , he was asked how far off the angle was. He replied   “about 6 inches’  and was told it had to be closer, this one comment made me think that this project was due to be ongoing for a long time..

Here’s a picture of an even bigger tree moving down the road….. it took about 2 years to prepare each tree for lifting. 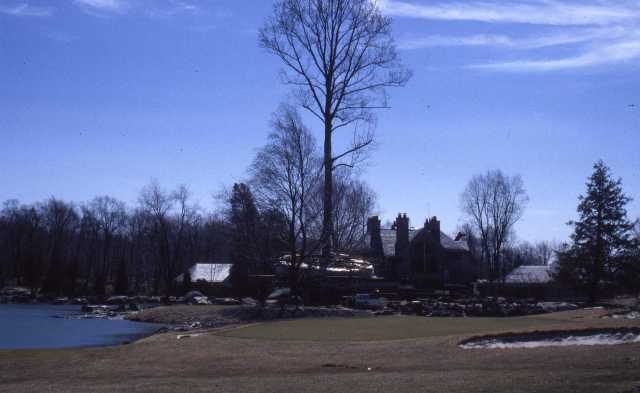 Back in the days when unrest descended on London, we had a project in Lambeth, a childrens play area with a huge wooden stockade, it might still be there to this day.. As you can see from the picture the logs were huge some 16ft tall and at least 10 inch diameter, all pressure treated so they would last a long time.

They had just been delivered to site when there was a particularly vigorous riot, cars  turned over and set alight, windows smashed, police stations attacked that sort of thing.. my  insurance broker called me in a panic at 7am to ask how things were, I told him fine was just having a cup of coffee and an egg sandwich, “why?” I asked. Then he told me he forgot to put my logs on ‘All risk” as I had requested the day before – it’s funny how you get to hear about these sort of events if you engage the locals..

Later that day I did go and visit the site, all was perfectly fine, apart from 4 or five burned out cars in the surrounding streets and the little matter of 15 rapid deployment police vehicles with full riot shields carrying about 10 fully protected policemen surrounding my site… I guess it could have been a proper panic as we say ! 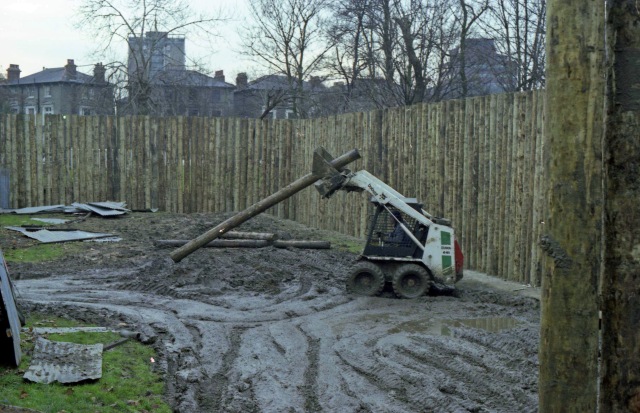 The hardest part was to figure how to pick up and place these huge poles, a bobcat with a then newly added 4 in 1 bucket worked out just fine.

Mind you, tracking over soft ground in wet conditions makes a terrible mess, destroys the soil structure, slows the progress down and makes a site look pretty dirty – best to try and avoid if possible. 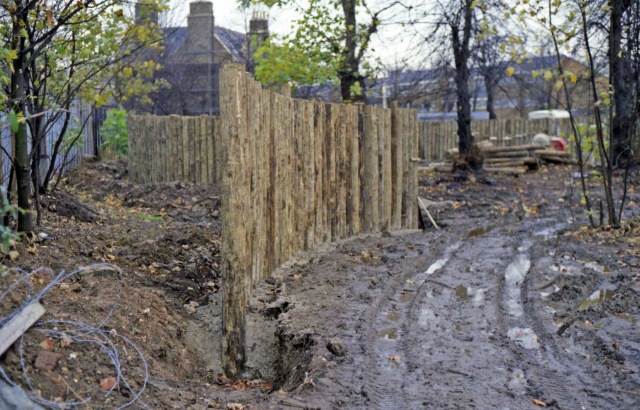 so now for some ingenuity.

This project was quite prestigious, a large roof garden on top of the Museum of London tracing the history of London’s plants and garden from the middle ages to the present day.

As is always the case working in odd places their are a few obstacles to overcome for access… in this case access was this smoke vent set halfway up a wall in an underground car park. the tunnel extended some 27ft before the main vent went to the roof.

Our challenge to move over 400 tons of materials through and up to the roof without damaging all the cars around.. 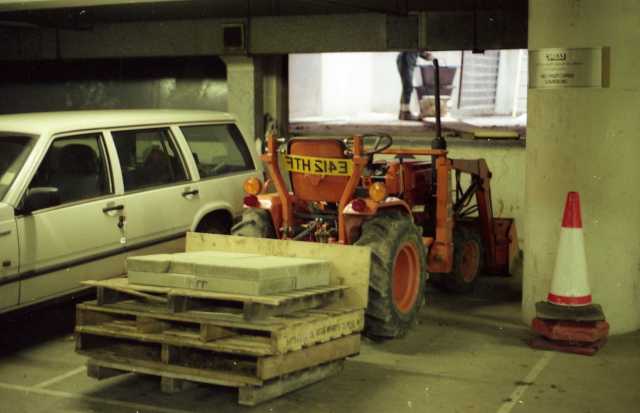 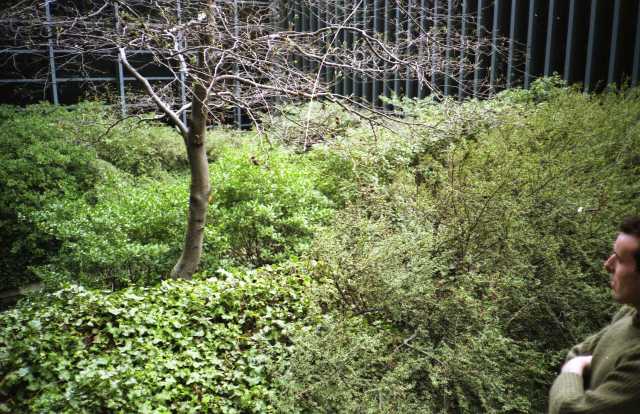 Here’s after we have cleared all the planting, set out the new and commenced bringing in materials.. 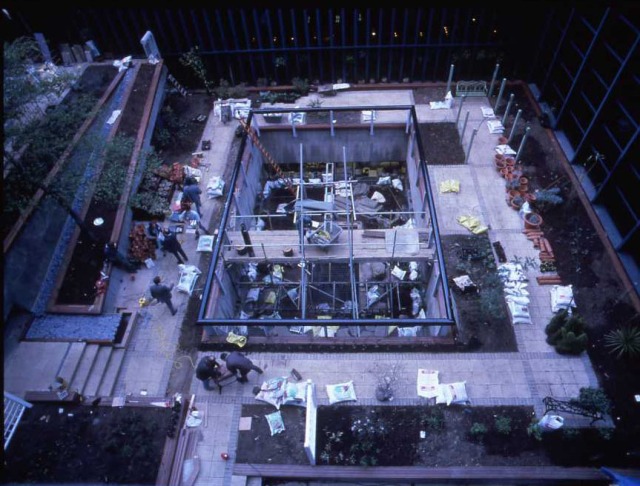 I’m the guy with the bald head in the suit in the middle of the folks on the left – yup had to wear a suit in the city of london !

Here’s the finished result…which was open to the public for 3 months, with us supplying the staff that took folks round ..

( well ok the ladders were removed and the gate swung back into place..) 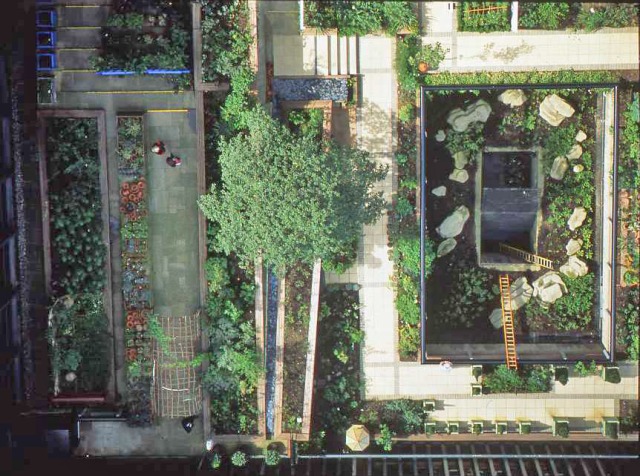 The Chelsea Physic Garden – Linking people to plants and nature