We have all rather taken water for granted over the years. Today for some it is becoming a topic of conversation, for others it is a topic of concern, and for yet others they are not sure if or when they will see enough potable water again.

Many European countries have developed system to recapture and reuse water more than once, others have quite simple systems of returning water as quickly as possible back to the aquifer ( it’s still a long process).

North America is waking up to the idea that extended droughts mean much more serious water conservation, something South American countries have been struggling with for quite some time.

As homeowners there are a number of ways to help preserve our dwindling water supplies, some are very effective others not so, but as they say every little helps.

The simplest is, I suppose the rainwater barrel, it will collect up to 40 gallons of water ( which means it just needs about 1/3rd of inch of rainfall for each downpipes to fill one). It’s best to keep out of full sun as in hot areas the water could become rather too hot for use on plants.

A slightly improved version of this would be a cistern, as seen below, they were often circular for strength. – this particular one would be quite costly.

Today  a much more interesting wrapped interlocking framing system has been devised – the ground is excavated and a waterproof membrane is laid on the sub base then filled with rectangular ‘Versitanks’. – These tanks can be from very small single units to many hundreds as seen here.

These can be almost any size or shape.

To get the surface water to these storage vessels requires a few more modifications to the current surface water run off arrangements.

The first is a simple slot drain to divert the water from a surface, such as this car parking area.

They can also be used at home to collect water from a driveway, here the downpipes will also be connected to the slot drain and probably then run to a soakaway. 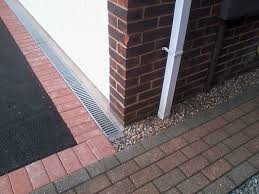 So what’s a soakaway? well most folks in England will know this, however my colleagues in the USA are just not as familiar with these simple victorian solutions to collecting water for returning to the aquifer.

In it’s simplest form all that is required is a hole filled with porous material – such as the brick version above. Drainage pipes run to this and water then is able to slowly seep back into the sub strata. ( Not a good idea in heavy clay soils as it will take way too long)

This much larger version is able to hold a huge amount of water, which can be reused for irrigation or just returned to the aquifer.

The collection method from say a down pipe is quite simple, involving a gulley pot .

A simple gulley pot is used to ‘grab’ the water before directing it to the drainage pipe. Below the gulley pot has a downpipe collector, and a slot drain collector and localized surface drain all in one unit.

Once the water has been collected it’s a simple matter to design a recycling system.

In it’s simplest form, often used by early Egyptians a localized storage vessel often made of clay was used right next to say a fruit tree.

Next came a slightly larger arrangement, although if you try this remember water can heat up, this might not be healthy for plants…

Finally a rather more sophisticated system that addresses many issues and is virtually hidden from view.

This next system requires , quite a lot of time, planning and expense, but in warmer climates it is probably the future solution. Perhaps the lawn will need to be re thought as, it would seem to me that growing more fresh produce is a much wiser use of the space.

Our web site www.grotrends.com will have details of our upcoming radio shows and podcasts on this subject, you may also visit iTunes for a recent show or www.growingtrends.org

Ann & Chris would love to hear from you with ideas and suggestions for the show, please drop us a line at info@grotrends.com

If I were to open a Garden Center today ?